Purpose: Help pharmacy students understand the needs and concerns of the community as it relates to medication management

Process: Years 2010 and 2011, conduct a pharmacist-led medication review and drug information service for the community to encourage interaction and learning between pharmacists, pharmacy students and the community.

Libraries were invited to host the event which was advertised through social media, newsletters and local newspapers.

Background: Subjects from the community were instructed to bring a list or 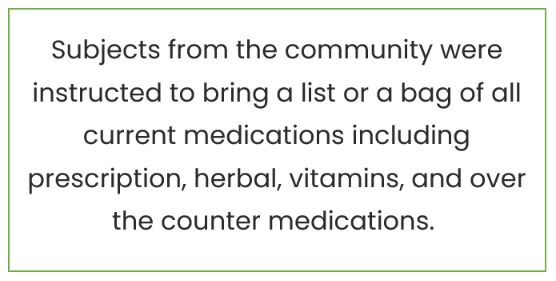 a bag of all current medications including prescription, herbal, vitamins, and over the counter medications. Volunteer pharmacists and faculty from St. John’s University College of Pharmacy and Allied Health Professions, sat one on-one with each of the community subjects to educate and discuss with them proper medication use. Medication reviews comprise of an analysis of all ones medications for drug-interactions, medication adherence, proper use and storage. In this year’s medication reviews we also had a drug-information specialist provide additional support and supplementary information. At the end of the sessions, subjects were provided with an updated medication card and follow-up notes for their primary care provider. While pharmacists are the most accessible health care providers, many community members do not have the opportunity to have an extended period of time to consult with them. This service provides these subjects with the opportunity to discuss their medication concerns at length. It also allows pharmacy students an opportunity to learn what the community concerns are and what they actually have in their medicine chest. Free medication reviews have been provided for the past 3 years using the Nassau county libraries, in particular, Wantagh and Freeport Public libraries and over 200 patients have been seen to date.

This year we decided to conduct surveys to evaluate the utility of this service. We surveyed patients on various qualitative and quantitative parameters.

Results/Findings: There were 8 pharmacist/faculty members present and over 20 St. John’s University College of Pharmacy interns present who served in an observatory capacity and to better learn the needs of the patient and community who use medications, vitamins and herbs. An average session lasted 30- 35 minutes. Data was collected from a total of 35 subjects. The study found that subjects were taking an average of 7 prescribed medications, 3 supplements (herbal/vitamins) and 2 over the counter products. The top three health conditions that subjects reported were hypertension (79%, n=22), dyslipidemia (64%, n=22) and diabetes/pre-diabetes (355, n=22). Of the 28 subjects surveyed, all of the subjects were attending for the first time. Twenty-eight percent stated that they were inquiring about drug interactions between their medications. When asked what problems were addressed, 78% of subjects expressed that general patient education was given through the attended session. Other concerns addressed were drug/food/herbal interactions, medication overuse, medication underuse, therapeutic duplication, and patient cost reduction. Conclusion: Overall, pharmacist led medication review and drug information services shown to have a positive effect on the community and the interns. Community members were impacted directly. Interns were reminded of confidentiality. Interns were taught to invite only the patient to sit with them and that the patient’s family member or friend should not be automatically involved in the medication review because it may hinder an open dialogue with the pharmacist. Pharmacists provided community members with pertinent information on how to better manage each medication.

As telephone follow- ups are being conducted we see that most of the patients found this service educational and helpful. Some patients took the information they obtained back to their general medical provider and concerns were further addressed.

Limitations: With this study, some limitations hindered the extent of the research. The main limitation was the small sample size due to the attendance at the event. A larger sample size, which will give better feedback on the impact of these sessions, could be achieved through additional events that will be more extensively publicized.

Comments by the Interns

Jena Marion, a fourth year pharmacy student, remarked “When I’m at work there’s things to be filled and rung up and doctors and phone calls and it’s really hard to sit down and talk to them, answer their questions and validate their concerns. This is why I really love being here. You can put a story behind the face. It’s not just a name on a label anymore, it’s a real person.”

Puja Sharma, a sixth year pharmacy student said “one patient was on three or four blood pressure medications and she didn’t know why she was on these medications.” “You learn something new from every patient”

Puja Deshpande explained. “A patient was on a duplication of therapies. She was taking a lot of over the counter supplements that had a lot of the same ingredients in them but she wasn’t aware of that fact.”